This morning, thousands of motorists in Utah woke up to the news that a major section of I-15 had been engulfed in flames.

According to news sites and the police, a Honda Civic swerved across all lanes of traffic and struck the trailer of a semitruck hauling 8000 pounds of diesel fuel, causing the truck to roll and igniting the fuel. Both drivers were taken to the hospital, with one in critical condition.

This unfortunate accident should serve as a reminder to us all of how cautious we need to be on the road, especially when anywhere near a semitruck.

Semitrucks are used to transport just about everything, from shoes to food to automobiles and medical equipment. If all the trucks on the road stopped for just 72 hours, stores would run out of food and gas stations would run out of fuel.

Essentially, semitrucks are vital to almost every aspect of our modern lives.

Because semitrucks need to haul so much freight, they can weigh up to 80,000 pounds. That is 80,000 pounds of freight, fuel, and rubber tires.

The weight of a six-cylinder Detroit Diesel engine alone weighs 2,880 pounds. That is 345 pounds MORE than an entire Mini Cooper.

With 80,000 pounds of a semitruck and trailer on the road driving at 65 miles per hour, motorists should give these machines and their Drivers as much safe operating room as possible.

Have you ever noticed the amount of space a truck will allow in front of itself during heavy traffic, when everyone else seems to be bumper to bumper? Those spaces do not exist just to annoy you and take up more room for no reason.

That space is what they need to safely stop.

A truck driving at 65 miles per hour, requires a full TWO FOOTBALL FIELDS to come to a complete stop.

The best practice for merging in front of a truck is to allow a car length for every ten miles an hour you are driving. If you are stuck in slow traffic going 30 mph? Leave three car lengths between you and the truck.

Going 65 miles per hour? Allow a full seven car lengths of distance between you and the truck, it gives plenty of reaction time and room to stop.

You do not want to cut off a truck and be caught in that stopping distance.

Remember how a semi-truck engine alone weighs as much as a Mini Cooper? That is the same ratio as a soda can being crushed by a freight train.

You might think your car can move fast enough, or you are a better driver, or that your vehicle could protect you in a crash. We are here to say you are wrong on all three counts.

Cutting off a Truck Driver can have deadly consequences, usually resulting in the motorist’s death. 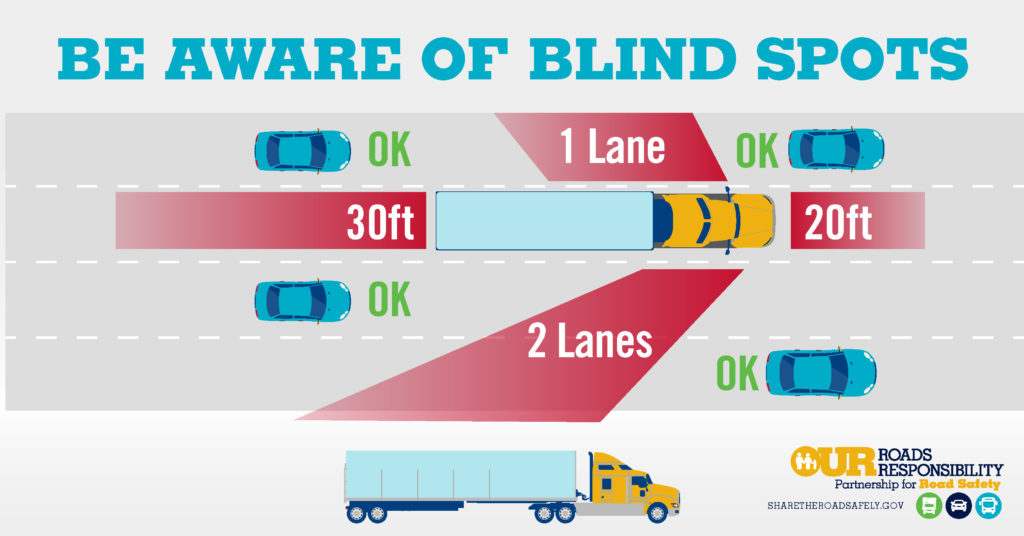 For example, if you are only ten feet away from the back of a semitruck, there is absolutely no way they can know you are behind them.

In addition, at 10 feet away, driving 55 miles per hour, you have less than a second to react if the truck begins slowing down.

Rule of thumb, if you cannot see the Truck Driver they cannot see you.

Despite all of this, motorists on the road will persist and drive dangerously around semitrucks.

When a motorist that is driving while drowsy at 1 a.m. veers through every lane of traffic and cuts off a semitruck, that semitruck Driver will do their best to avoid hitting you which can cause all manner of other accidents to occur on the road.

When a Truck Driver veers to avoid hitting something in their way, it can sometimes cause a rollover accident – which is exactly what it sounds like:

When a truck swerves hard for any reason, whether due to heavy winds or being suddenly cut off, that driver can swerve and over correct causing the entire truck and trailer to tip over onto its side and roll over.

If a Truck Driver is cut off on snowy roads, they have a high probability to jackknife. A jackknife, or jackknifing, is the term used to describe when the rear wheels of the truck lock up and the trailer swings around to an acute angle with the truck.

Both are dangerous and deadly to everyone on the road.

The best and safest thing to do if you are in no condition to drive is to pull over in a safe space until you feel safe to drive again – whether that’s due to drowsiness, road rage, or other reasons.

There is no reason to put your life or the life of anyone else on the road at risk. No freight, no text, no amount of time getting to work early is worth anyone’s life. For more tips on staying safe on the road, please visit this link.

**We do not send small parcels or send tracking numbers**